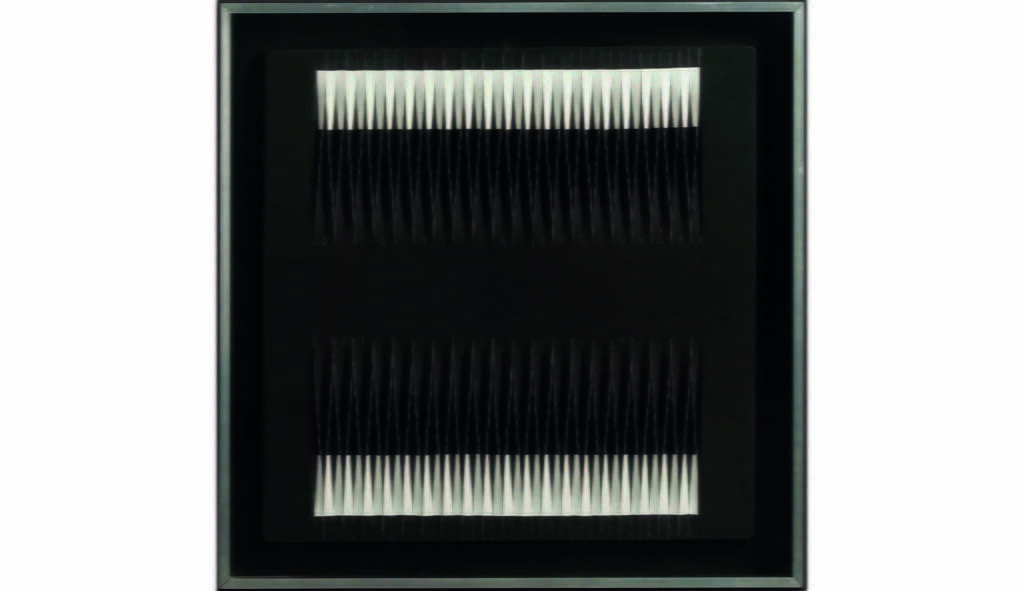 Walter Leblanc was born in Antwerp on 26 December 1932.

From 1949 to 1954, he studied at the Academy, under Antoon Marstboom among others, whose education he appreciated enor-mously, and under René De Coninck for a printmaking course. Concurrently with his studies he took evening classes at the School of Decorative Arts under the direction of Roger Avermaete.

In 1958 he became a founding member of the artist group G58, of which the first exhibition was held at Kasteel Middelheim. The group brought together young artists representing a variety of trends who were protesting against the fact that not a single young Belgian artist was represented at the exhibition “50 Ans d’art moderne”, organised as part of the Brussels World’s Fair (Expo 58).

For Leblanc, 1959 marks the affirmation of his use of “torsion” as the principal pictorial element in his work. In 1960 he produced, with the help of his brother, a definitive version of his “twisting machine”, which enabled the production of very precise metallic torsions. That same year he participated in the groundbreaking exhibition “Monochrome Malerei” in Leverkusen.

In 1961 a first large exhibition was organised at the Centre for Fine Arts in Brussels. In 1962 Leblanc curated the exhibition “Anti-peinture” at Hessenhuis, together with Jan Gloudemans, Francis Lauwers and Filip Tas. At the end of that same year, due to a lack of funding and solidarity among the artists, the group G58 ceased its activities.

Leblanc actively participated in the two movements, ZERO and Nouvelle tendance, and took part in major international exhibitions, such as “The Responsive Eye” (1965), “Weiss auf Weiss” (1966) and “Serielle Formationen” (1967).

In 1964 he produced his first architectural “intégrations” and was the recipient of the Young Belgian Art Prize. In 1966, thanks to the presence of an international jury, the Grand Prix Europe de Peinture of Ostend was awarded to Leblanc. ln 1967 he was a prizewinner at the V Biennale de Paris, and in 1969 he won the Prix Eugène Baie de Peinture.

In 1970, three months before the opening of the 35th Venice Biennale, as his move had been set for July and most of his works were already in Germany, Leblanc learned that he had been named as one of the Belgian representatives at this event. He has his works transported back to Belgium and selected the pieces to be presented in the room dedicated to him at the Belgian Pavilion.

From 1981 onwards Leblanc—who always dreamed of making monumental works—worked on his mural for the Simonis metro station in Brussels, which was completed posthumously in the summer of 1986.

On 14 January 1986, as he was on his way to finalise the room dedicated to him at the exhibition Rapports Plan-Espace / Tussen Vlak en Ruimte, curated by Phil Mertens at the Museum of Modern Art in Brussels, Walter Leblanc died in a car accident.