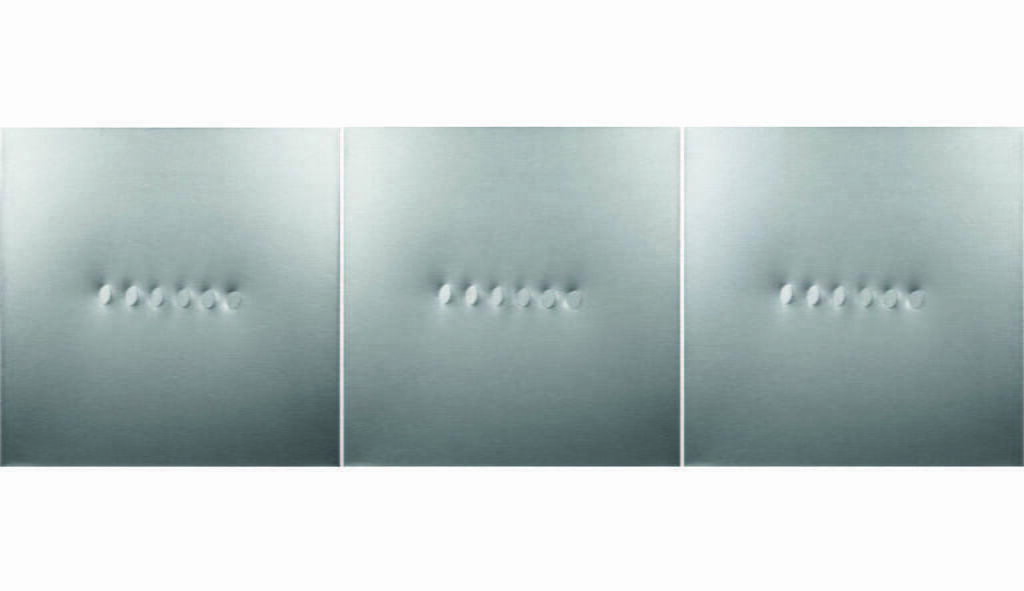 Turi Simeti was born in 1929 in Alcamo, in the province of Trapani, Italy.

He studied law in Palermo, and in 1958 he moved to Rome. There he started his first contact with the art world, knowing, among others, Alberto Burri, that influenced his artistic practice. During those years, he spent some periods of stay in London, Paris and Basel, coming into contact with avant-garde art. Around the middle of the ’60s, his production was displayed numerous times, starting from the first show in Milan at Lucio Fontana’s studio in 1965. The artist joined Zero Avantgarde, a group exhibition that reunited Italian and International artists from the ZERO Group, such as Hans Haacke, Yayoi Kusama, Agostino Bonalumi, Enrico Castellani and Dadamaino, Yves Klein and Piero Manzoni. Then the show continued at the Gallery Il Punto in Turin and the Galleria Il Cavallino in Venice. The same year with Bonalumi, he exhibited for the first time a selection of works in Austria, Klagenfurt, in the spaces of Galerie Wulfengasse. At the same time, in 1966, he held an individual exhibition at the Galleria Vismara in Milan. Here Simeti created his studio, where he has been working for several years, alternating his presence in Italy with stops in Europe, especially in New York. There he was invited as “Artist in Residence” by Fairleigh Dickinson University, living and working in the city for long periods until 1969.

In the 80s, his work was exhibited in Studio Grossetti in Milan and the following years at Galerie Passmann in Friburg, Galerie Wack in Kaiserslautern; at Galeria Paulo Figueiredo de San Paolo and Galerie 44 in Düsseldorf.

Between the ’90s and early 2000s, Simeti followed personal exhibitions in Italian and foreign galleries uninterruptedly, including Kunstverein in Ludwigsburg in 1996 and the Galerie Kain in Basel in 1998. In 2014 Simeti was designated Artist of the Year and thus won the Premio delle Arti Premio della Cultura at the Circolo della Stampa in Milan.