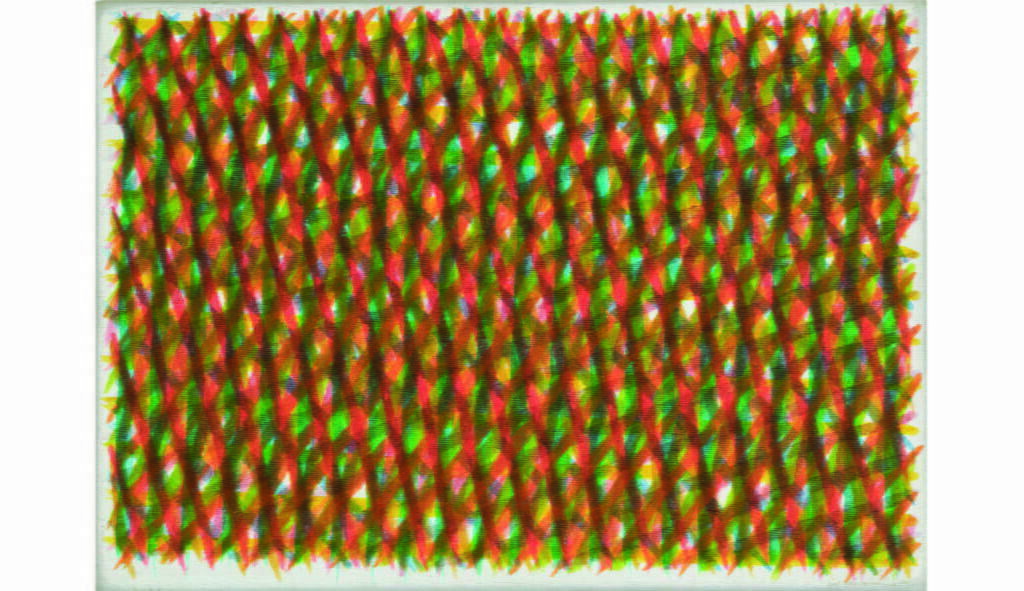 Piero Dorazio was born in Rome in June 1927.

After graduating from a liceo classico (secondary school with an emphasis on the Humanities), he embarked on the study of architecture. From 1942-43, after frequenting painter Aldo Bandinelli’s studio, he turned to art and started painting still-lifes and landscapes. At the age of twenty, in 1947, along with Carla Accardi, Ugo Attardi, Pietro Consagra, Mino Guerrini, Achille Perilli, Antonio Sanfilippo, and Giulio Turcato, he founded the “Forma 1” group and contributed to the drafting of the manifesto of the same title; he visited Paris for the first time, where Gino Severini introduced him to the leading international artists of the period. In 1950, with Guerrini and Perilli, he founded the bookshop-gallery “L’Age d’Or”, as a means to promote abstract art. In the early 1950s travels often to New York, where in 1953 he held his first solo exhibition at the Wittenborn One-Wall Gallery. Upon returning to Italy in 1955, he published La fantasia dell’arte nella vita moderna, a study of modern trends in the visual arts. Following a series of journeys and showings at the Venice Biennale (1956 and 1958, with a personal room in 1960) and other international exhibitions (including ‘Documenta’ in 1959), in 1960 the artist returned to the US, where he taught at the University of Pennsylvania. In 1961, he received the Prix Kandinsky. His work was regularly featured in major group exhibitions both in Italy and abroad, including “The Responsive Eye” at the New York Museum of Modern Art in 1965.

In 1974 he moved to Todi, where he established his home and studio. In 1977 a monograph contributing to a catalogue raisonné was published by Alfieri and in 1979 a first retrospective exhibition of the artist’s work was held at the Musée d’Art Moderne de la Ville de Paris. In 1983, he held a retrospective of his work at the Galleria Nazionale d’Arte Moderna in Rome. In 1984 he began writing for “Il Corriere della Sera”. In 1986, he received the Accademia di San Luca Prize and in 1988, he had a solo room at the Venice Biennale. During the 1990s his work was featured in major solo exhibitions at the Musée de Grenoble (1990), at the Galleria Civica in Bologna (1991), at the Civic Museum in Athens (1994), and at the PAC in Milan (1998). In 1990, he received the Alcide de Gasperi Prize for Arts and Sciences and in 1993, he was appointed member of the Akademie der Künste in Berlin. In 2001, the exhibition “Dorazio Jazz” was inaugurated at Museion in Bolzano and in 2003, a retrospective exhibition was held at the IVAM – Institut Valencia D’Art Modern in Valencia.

Dorazio passed away in Perugia in May 2005. Since 2017 the Piero Dorazio Archive have been collecting data in order to complete the catalogue raisonné of the artist’s oeuvre. Dorazio’s works are part of some of the world’s most prestigious public and private collections, including those of the Museum of Modern Art (New York), Tate Modern (London), Centre Georges Pompidou (Paris), and Galleria Nazionale d’Arte Moderna e Contemporanea (Rome).