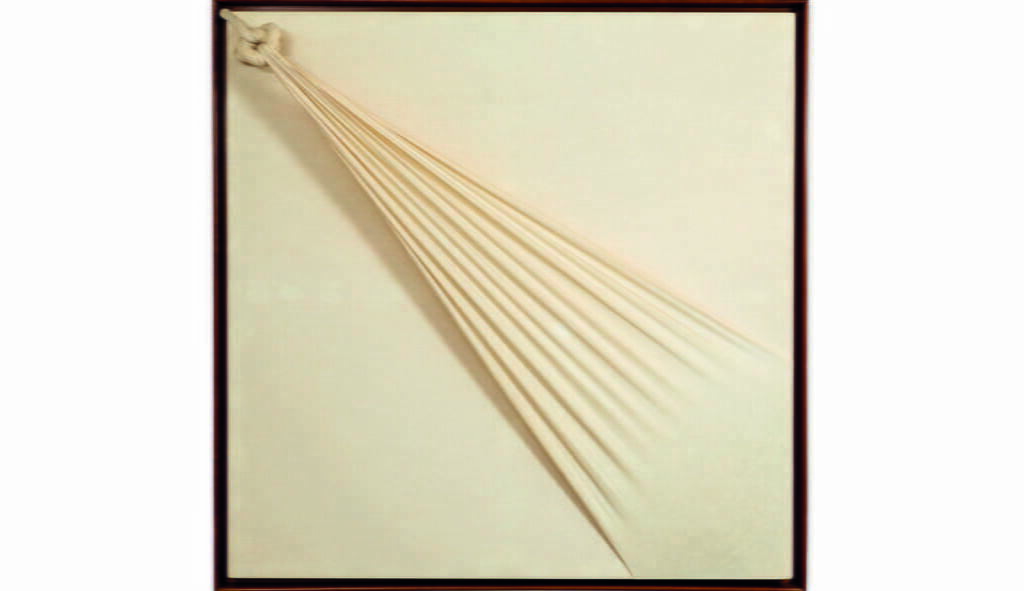 Jorge Eduardo Eielson was born in Lima in 1924.

He left his native land at the age of 24 thanks to a scholarship in literature, and spent the rest of his life in Europe establishing connection with come of the most important personalities of Contemporary Art like Fontana, Burri, Dorazio, Hains, Rotella, Capogrossi, Beuys, Buren, Noland, Venet, Scarpitta and Serra.These encounters provided crucial stimuli for the development of Eielson’s highly personal visual language, which further evolved when he moved to Rome in 1970.

Since his youth Eielson demonstrated aptitudes for art, so that he started experimenting with visual arts, producing a versatile body of work ranging from paintings, sculptures and live performances.

Poet and visual artist, Eielson is best known for his Quipus series, an exploration of material, form and communication that he began in 1963 and continued for four decades. The works are inspired by the ancient quipus – a record-keeping system invented by the pre-Columbian Incas of Peru – and use shape and color to covey meaning. Eielson created his contemporary versions of the ancient device in raw canvas that he stretched, twisted, knotted, and then painted in monochrome or polychrome bands; each hue, knot, and intersection represent a symbol or word. The torsion and tension of the fabric break out of the two-dimensional boundaries of the flat surface, providing space for additional meanings in Eielson’s singular visual and linguistic system.

The Quipus and Nodos embody Eielson’s position as both a distinctly Peruvian artist and an engaged member of the international avant-garde. He rose to prominence as part of the Peruvian movement known as “Generation 1950”, before relocating to Europe.

During his life, Eielson participated in four Venice Biennales (1964, 1966, 1972, and 1988) and was included in Documenta V (1972). His work has been exhibited internationally and is in the collections of the Museum of Modern Art, New York; Museo de Arte de Lima, Lima; the Rockefeller Collection, New York, and the Blanton Museum of Art, Texas, among others. A major retrospective of Eielson’s work was presented in 2017 and 2018 at the Museo de Arte de Lima in Peru.

After a successful and rich career, Eielson died in 2006 in Milan where he was living at the time.