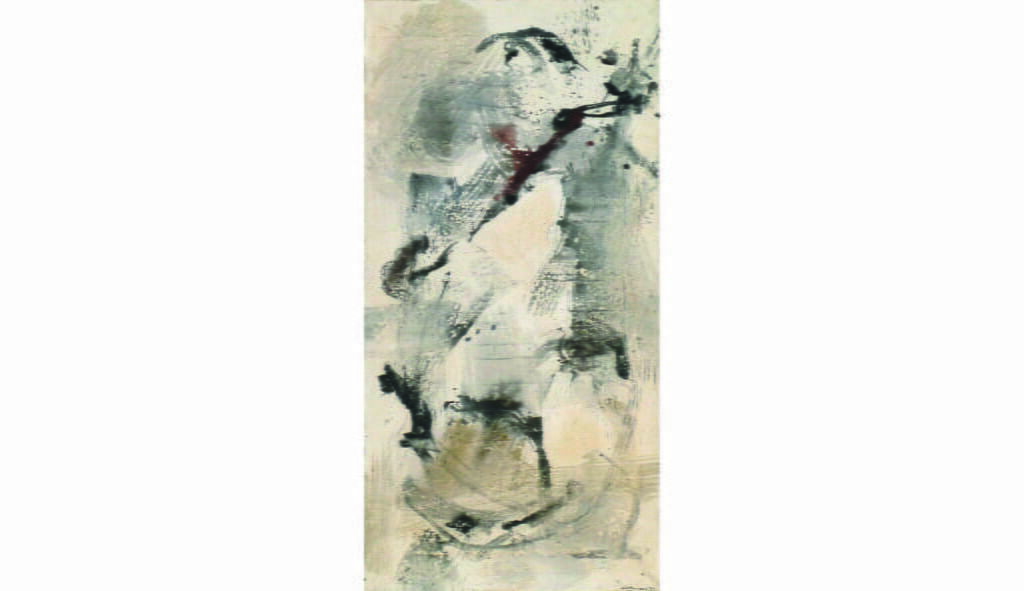 Giuseppe Santomaso was born in Venice on 26 September 1907. The son of a master goldsmith and dealer in precious stones, he trained as a jeweller but soon developed a passion for painting that was ultimately to prevail over his father’s wishes.

1934 saw Santomaso’s first participation in the Venice Biennial, a turning point came in 1937 with trips to the Netherlands by invitation of the collector Engbert Jurjen Duintjer Jzn., whom he had met in Venice in 1936, and to Paris, which brought him into direct contact with the latest avant-garde developments. In 1939 he held a solo show in Paris at the Galerie Rive Gauche, with a presentation by Marchiori, and took part in the second exhibition of the Corrente group at the Galleria Grande in Milan.The following year saw his first solo show in Italy, held at the Galleria Genova in Genoa.

A meeting with the American collector Peggy Guggenheim in Venice in 1946 marked the start of a relationship of trust and friendship that was to last for years. During the same year he was also a signatory of the manifesto of the Nuova Secessione Artistica Italiana, later called the Fronte Nuovo delle Arti, a movement led by Marchiori. In June 1947 he took part in the group’s first exhibition, held at the Galleria della Spiga in Milan. The Finestre series was born that autumn during a period spent at La Rotta, Marchiori’s house in the country near Lendinara. Santomaso showed work in the 1948 Venice Biennial and took part the following year in “Twentieth-Century Italian Art” at the Museum of Modern Art in New York. The late 1940s and early ’50s saw a series of exhibitions, mainly outside Italy, and a number of awards.He took part in the São Paulo Biennial in 1951, 1953 /1954 and 1961, and in Documenta (Kassel) in 1955, 1959 and 1964.

The late 1950s and the ’60s saw long stays in Poland, Spain and Puglia, which had a marked impact on his painting. 1960 saw two major exhibitions of his work, one at the Stedelijk Museum in Amsterdam and the other at the Palais des Beaux-Arts in Brussels.

Deep emotive reaction to the catastrophic flooding of Florence in 1966 gave rise to his first work on the Cimabue crucifixion, Omaggio al Crocifisso di Cimabue, which marked transition to a form of pictorial Minimalism. In 1969 he signed his first contract with Peppino Palazzoli’s Galleria Blu in Milan, his solo representative in Italy until 1973. Friendship with the poet Ezra Pound led in 1972 to the creation of the artist’s book An Angle (Erker-Presse). Produced in 1977 and ’78, the Lettere a Palladio series was presented in 1979 in the major exhibition of his work held first at the Fundació Joan Miró in Barcelona and then at the Staatsgalerie Moderner Kunst in Munich. In 1984 he signed a new contract with the Galleria Blu in Milan, now directed by Luca Palazzoli, which became his sole representative with exclusive world rights.

His last participation in the Venice Biennial came in 1988 with a group of recent paintings emblematic of his work in the 1980s, in which the artist adopted new colours, angles, and connections to rework the image of his home town once again.