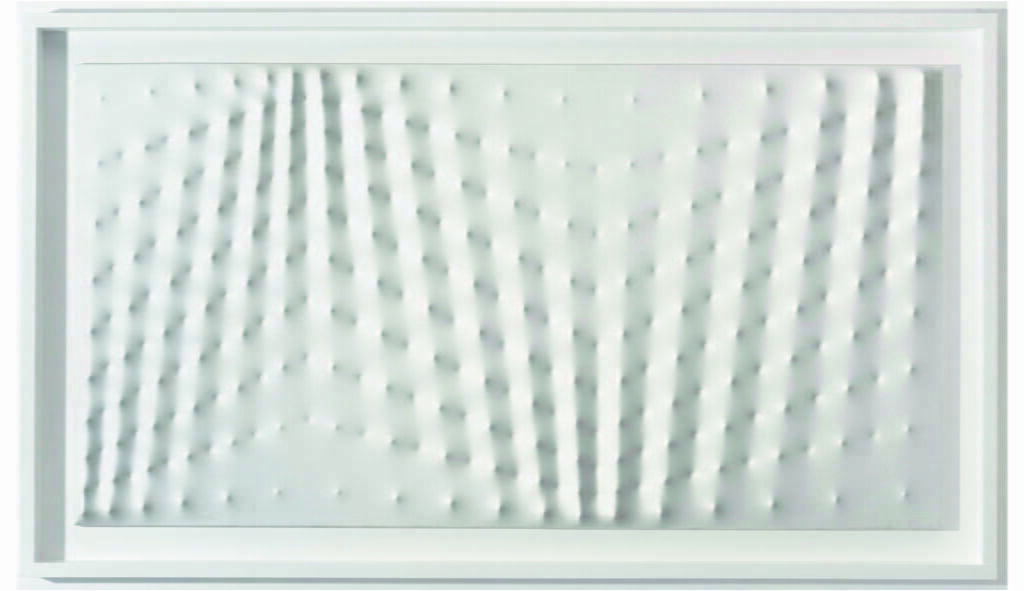 After moving to Milan in 1956, he began to make art that challenged the conventional separation of painting, sculpture, and architecture, searching instead for a paradigm that combined aspects of all three. In 1959 Castellani created his first painting in relief, celebrated Superficie, a series defined by the rhythmic protrusions and recessions of a monochrome surface, typically stretched taut over a pattern of nails.

Together with Piero Manzoni, who had ties with artists throughout Europe, he was an active member of the Zero group; he founded the magazine “Azimuth” and a gallery of the same name. It was there that he held his first solo exhibition, in 1960.

Through his art and writings, Castellani advanced an approach to painting that refuted the traditional conception of the canvas, opening his work onto a new space of abstraction that engaged notions of space, time and flux.

Following a string of successful exhibitions throughout the 1960s, in 1973 he moved to a small fraction of Viterbo, in Celleno, where he settled down and worked for the rest of his life, proceeding with his research which extends to to include a variety of heterogeneous materials.

Castellani’s works are included in numerous major public collections, including the Centre Pompidou, Paris; the Fondazione Prada, Milan; the Walker Art Center, Minneapolis; the Museo d’Arte Contemporanea Roma (MACRO), Rome; the Peggy Guggenheim Collection, Venice; and the Hirshhorn Museum and Sculpture Garden, Washington, D.C. He represented Italy at the Venice Biennales of 1964, 1966, and 1984.

The last major recognition given to the artist while he was alive was the exhibition “ZERO:Countdown to Tomorrow, 1950s-60s”, realised in 2014-15 by the Solomon R. Guggenheim Museum, New York.

Enrico Castellani died in December 2017 at the age of 87.