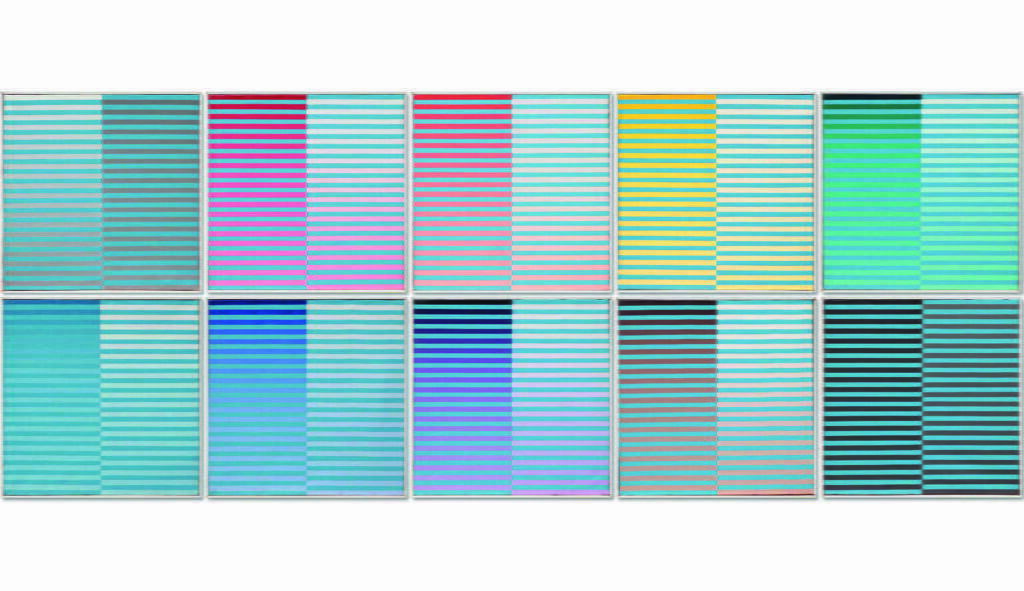 Eduarda Emilia Maino was born in Milan in 1930.

A self-taught painter Dada (diminutive for Eduarda) took up art after completing a medical degree. In 1957 she met Piero Manzoni who became a life-long friend. The following year she adhered to the Milanese avant-garde and created her first substantial body of work, the Volumi, creating elliptical and circular holes into canvas, which bear a strong resemblance to Fontana’s Buchi. This same year Dada had her first solo show at the Galleria dei Bossi in Milan.

After joining the Azimuth and ZERO collectives—and taking inspiration from Spatialist and Minimalist masters Lucio Fontana and Yves Klein—she became interested in the relationship between art and space and how it can be represented through shapes.

In 1961 the artist took part in a show in the Netherlands, where her name was mistakenly spelt as one word, Dadamaino. From 1963-64 onwards she would adopt this name.

In 1962 she exhibited alongside with the major Nul group artists in a show held by the Stedelijk Museum in Amsterdam. This same year she joined the newly founded Nouvelle Tendence movement whose members included Getulio Alviani, Bruno Munari, Raphael Soto and Enzo Mari. In this period, fascinated by the idea of movement she created a series of optical-dynamic objects, these were followed by the Ricerca del colore (1966-68) in which she undertook a scrupulous analysis of the solar spectrum’s chromatic combinations.

In the 1970s Dadamaino moved to experimentation with the popular Op Art movement, creating optical illusion paintings. A decade later, she turned to semiotics, drawing tiny symbols and pseudo-letters obsessively and repetitively across canvas and paper. She resorted to the same set of signs in her cycle, I fatti della vita, which she showed at the Venice Biennale in 1980. Three years later a large retrospective of her work was organized by the Padiglione d’Arte Contemporanea in Milan, and in 1990 she participated again in the Venice Biennale. A full retrospective of her work was mounted in 2000 by the Bochum Museum.

Her work can be seen in collections allover the world, including the Tate Modern in London, the Peggy Guggenheim Collection in Venice, and the Foundation of Concrete Art in Germany.