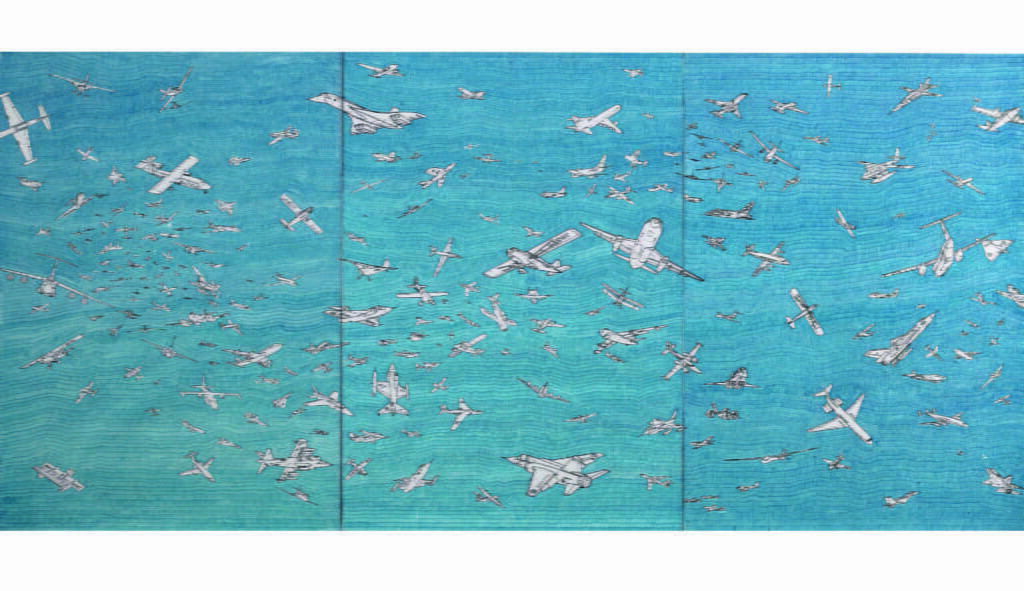 Alighiero Boetti was born in Turin,Italy, in 1940 and lived and worked in Rome, where he died in 1994.

Boetti’s early works from the 1960s were largely object-oriented and fitted well within the realms of the Arte Povera movement. However, his work became increasingly distinctive in its conceptuality. As duality was a important concept in his art, from 1968 he added an “e” (Italian for “and”) between his first name and surname creating a double character which he used throughout his career.

Boetti travelled to Afghanistan for the first time in 1971 and visited the country regularly until 1979 when the Russian Army invaded the country. Amazed by the embroideries made by Afghan weavers, he commissioned them to produce large-scale works, including his famous Mappe, Arazzi and Kilims. The embroideries were initially designed in Italy, with the help of his assistants, and then fabricated in Afghanistan. However, after the Russian invasion in 1979 the production was moved to Pakistan. This enabled Boetti to integrate Middle Eastern culture and tradition into his works (often represented by Farsi writing), since he was very much interested in the principles of polar forces and harmonies and hence bridging West and East.

Throughout his career, Boetti continued to work with, including ballpoint pens (biro) and even the postal system. Boetti’s Biro works are prominent within his oeuvre; the complex surface pattern is achieved through hundreds of thousands of biro marks, all laboriously applied by his friends and acquaintances. The end result gives the impression of a complex and vibrating surface texture. As with Boetti’s embroideries, language and communication is prevalent in his Biro works. Letters of the alphabet were often laid out to form an index on the left side of the paper. Boetti then assembled commas horizontally so that they corresponded to each letter of the alphabet. The work can be “read” from left to right following the position of the commas in relation to the letters.

Alighiero Boetti took part in two Documentas and five Venice Biennales, is represented in numerous important public and private collection worldwide. He has been exhibited in major galleries and museum in Europe and the United States. In January 2013 a solo show of Boetti’s work opened at Rome’s MAXXI Foundation; in celebration of the artist and in conjunction with the exhibition, the City of Rome officially dedicated the MAXXI piazza to Boetti.